As a public service part of a Federal Scientific Institution, the most important responsibilities of the Seismology Section of the Royal Observatory of Belgium (ROB) are the preservation, the development, the study, and the promotion of the scientific heritage related to earthquake activity in Belgium and in the world.

Under the terms of these principles, the Seismology Section closely tracks the technological and scientific developments in the domain of seismology, carries out scientific research, and provides information to the public and private companies.

To realize these objectives, our actions consist of : 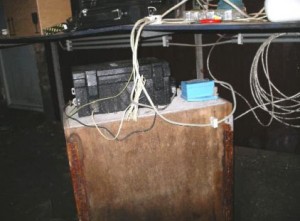 Pillar of the seismometer (blue) and the accelerometer (black box) in the station of La Chartreuse (LCH) in Liège.

Whenever an important earthquake is felt on the Belgian territory, the Seismology Section provides :