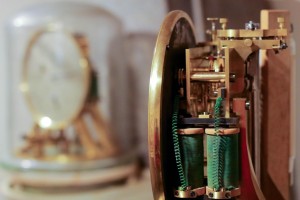 One of the missions of the Royal Observatory of Belgium is to integrate Belgium into international space and time reference systems. In particular, it carries out the participation of Belgium to the international time scale UTC (Universal Coordinated time) and keeps a precise realisation of UTC, namely UTC(ORB). This realisation is freely distributed via Internet (NTP) enabling anybody to be synchronised with the Belgian Legal Time. The Time Lab is also in charge in informing the Belgian users about the definition of the second, the time scales and, last but not least, the introduction of a leap second.

The time lab is also at the cutting edge of reasearches in time scales and clock comparison using GNSS satellites (GPS, Galileo…). Another field of our research is the solar-terrestrial perturbations of GNSS signals (ionosphere, multipath, dark matter…). Thanks to our high level of expertise, we also play a key role in the development and operations of Galileo.