GNSS stands for Global Navigation Satellite Systems, such as the US GPS, the Russian GLONASS and the upcoming European Galileo systems. 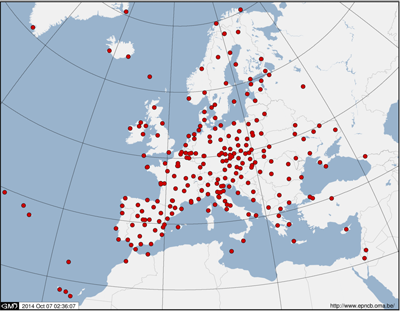 The main mission of the GNSS research group is to include Belgium in international reference frames, such as the global International Terrestrial Reference System (ITRS) and the European Terrestrial Reference System (ETRS89). This integration is done through permanently observing GNSS sites (installed on the Earth’s surface) with well-monitored positions and velocities in the ITRS or ETRS89 systems. These stations are then used as reference points with respect to whom a user can precisely determine his position in an international frame.

This mission comprises the following tasks:

In addition to its main mission, the GNSS research group also aims at exploiting the permanent GNSS tracking data of the reference stations for several multi-disciplinary scientific studies and services:

All of the above-mentioned applications use GPS signals. Some use in addition GLONASS signals. In addition, our scientists are studying the use of new satellite navigation signals (e.g. new GPS and Galileo signal) to improve these applications.