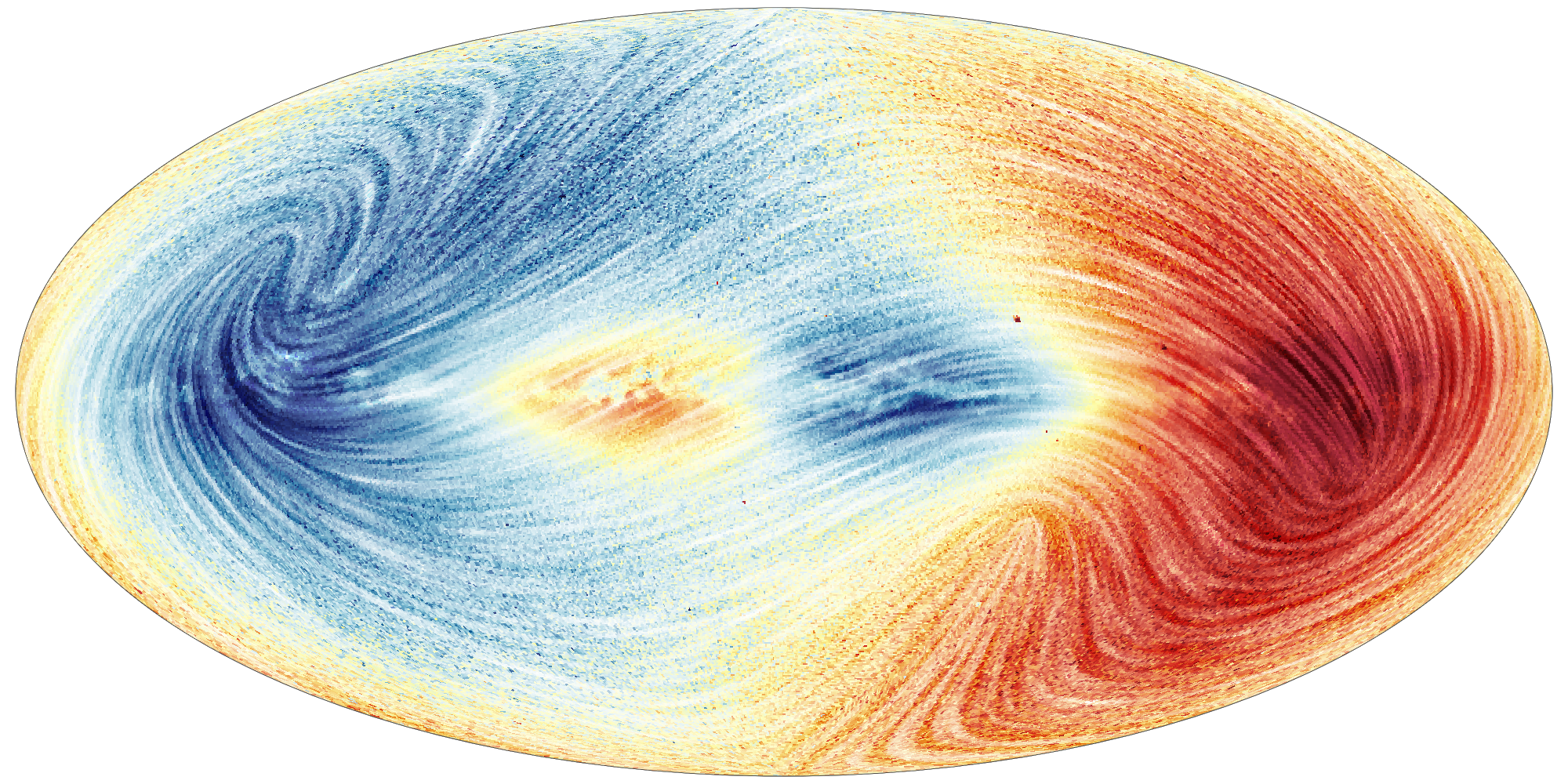 
13 June 2022 – Today, the European Space Agency (ESA) announces the most detailed Milky Way survey to date. The third data release of the Gaia satellite provides a wealth of information on the stars and other celestial objects that make up our Milky Way. Belgian astronomers, including scientists from the Royal Observatory of Belgium, contributed to the Europe-wide consortium that makes this catalogue available. The survey will allow us to discover new asteroids, binary stars and “starquakes” and shed new insights into our Milky Way Galaxy.

The Gaia satellite has been charting the sky since 2014, and its map includes stars that are a million times fainter than can be seen with the naked eye. Gaia has measured exceptionally accurate distances to almost 2 billion stars, and has measured how fast and in which direction the stars move through space as they orbit the centre of our Milky Way.

The third data release of Gaia adds a completely new dimension to these previous results. Using the spectroscopic information that Gaia collected, astronomers have determined stellar temperatures, masses, and ages of these stars. Also the speed at which stars move towards or away from us was determined, as well as their chemical composition. Detailed information about stars that vary in brightness over time or starquakes, or stars that are part of a binary system, is a further important part of the data release. It does not stop there, because Gaia also sees objects much closer by than the Milky Way stars, such as asteroids in the Solar System. Much further away, it has observed millions of galaxies and quasars outside our Milky Way.

The Royal Observatory of Belgium (ROB) used its expertise to analyse the spectra collected by the Gaia satellite. “The third Gaia Data Release represents a real breakthrough in the characterization of the stars of our galaxy, especially for the youngest, hottest and farthest ones”, says Dr. Yves Frémat. ROB scientists also contributed to determining the line-of-sight velocity of an unprecedented 33 million stars. Dr. Alex Lobel adds: “These data provide long-awaited fundamental information for new and important discoveries in the coming years about the galactic structure and evolution “.

The ROB also contributes to data processing related to asteroids. The present Gaia release contains some 20 million accurate positions of more than 150 000 asteroids. “Never before have we had such highly accurate orbits for so many asteroids”, says Dr. Thierry Pauwels, who works on the software to determine the position of asteroids.

The specialised expertise of Belgian researchers played an important role in the Europe-wide consortium that analysed the enormous amount of Gaia data. Astronomers from KU Leuven, the Royal Observatory of Belgium, Université libre de Bruxelles, Universiteit Antwerpen and Université de Liège all contributed to this work. The Belgian participation to the Gaia mission has been made possible through funding provided by the Belgian Federal Science Policy Office (BELSPO) via the PRODEX Programme of ESA. 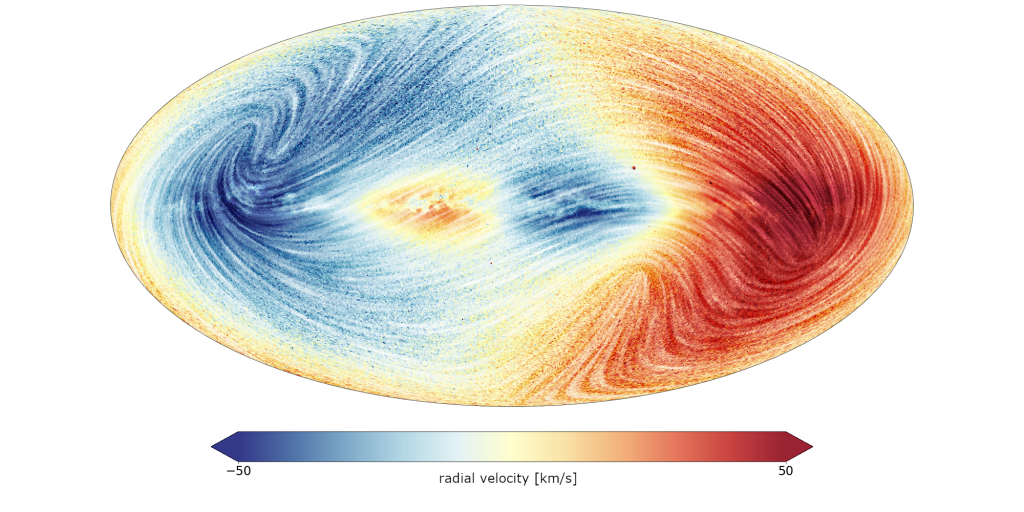 ESA’s Gaia data release 3 shows us the speed at which more than 30 million Milky Way stars move towards or away from us. This is called ‘radial velocity’ and it is providing the third velocity dimension in the Gaia map of our galaxy. Together with the proper motions of stars (movement across the sky), we can now see how the stars move over a large portion of the Milky Way.

This sky map shows the velocity field of the Milky Way for ~26 million stars. The colours show the radial velocities of stars along the line-of-sight. Blue shows the parts of the sky where the average motion of stars is towards us and red shows the regions where the average motion is away from us. The lines visible in the figure trace out the motion of stars projected on the sky (proper motion). These lines show how the direction of the speed of stars varies by galactic latitude and longitude. The Large and Small Magellanic Clouds (LMC and SMC) are not visible as only stars with well defined distances were selected to make this image.

The Royal Observatory of Belgium, ULiège and UAntwerp contributed to the radial velocity computation of the stars from Gaia data.

The asymmetric Milky Way in motion 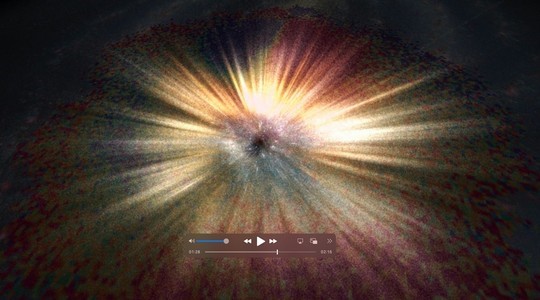 ESA’s Gaia data release 3 shows us the speed at which more than 30 million Milky Way stars move towards or away from us. This is called ‘radial velocity’ and it is providing the third velocity dimension in the Gaia map of our galaxy. We can now see how the stars move over a large portion of the Milky Way’s disc.

Thanks to Gaia, we can clearly see that the stars on average do not rotate with circular motions around the centre of the galaxy. This is because our Milky Way is not symmetric around its axis. It is a ‘barred’ spiral galaxy, and the motions reveal the orientation of the central bar.

The Royal Observatory of Belgium, ULiège and UAntwerp contributed to the ‘radial velocity’ computation of the stars from Gaia data. 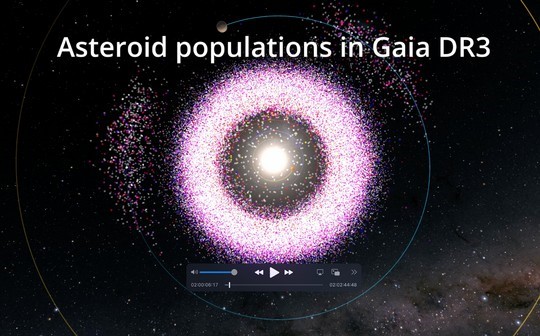 By far the largest group of Solar System objects in Gaia’s data release 3 are 154 741 asteroids for which Gaia has determined their orbits. Depending on their orbits one can distinguish different groups of asteroids.

The Royal Observatory of Belgium contributed to the Gaia data processing of asteroids and solar system objects.

However, with the Gaia observations we now have very accurate orbits for 150 000 asteroids, and their positions can be derived within a few kilometres, so that we can predict with pretty great confidence where an occultation will be visible. Thus, occultation observers can plan their observations much more efficiently.

If enough observers note the timings of disappearance and reappearance of the star, the silhouette of the asteroid can be reconstructed, as we can see here on the figure. This tells us something about the physical properties of asteroids.

Know your enemy. If ever an asteroid is found on a collision course with the earth, we will be better prepared to define a mitigation strategy.

The Royal Observatory of Belgium contributed to the Gaia data processing of asteroids and solar system objects.

This news was based on a joint press release from the Royal Observatory of Belgium, KU Leuven, ULB, ULiège and UAntwerpen.