Using several thousand images of Saturn’s moons recorded by the Cassini orbiter (NASA/ESA), an international team of scientists called ENCELADE, which includes researchers from the Royal Observatory of Belgium (ROB), has detected small fluctuations in the gravitational field of Saturn. Available online in the journal Icarus, these results follow from a series of extremely detailed investigations undertaken by this team that focus on deepening our understanding of the Saturn ecosystem. This new vision of Saturn’s evolution is also described in the form of an 8-minute movie animation, published online today on the Dailymotion channel of the Paris Observatory.

The Saturn system and the effects of tides

The Saturn system, one of extraordinary complexity, is composed of 62 satellites, with various shapes, sizes and compositions. Since 2004, the Cassini probe has been orbiting the giant planet and providing a huge number of images of Saturn and its environment. After having analysed several thousand astrometrical images of about fifteen of Saturn’s moons, researchers have succeeded in quantifying for the first time the tiny variations of the gravitational field of the planet resulting from the tides raised by each of these moons.

The effects of tides arise due to the differential gravitational attraction of a celestial body exerted on the various portions of another. The body undergoing tidal deformation, in this case Saturn, will take on an ellipsoidal shape, like that of a rugby ball. This results in a change in its gravitational field, which will then, in turn, modify the motion of the bodies orbiting around it, in this case the moons.

Measuring the resulting tiny fluctuations in Saturn’s gravitational field would be virtually impossible without the close passage of the Cassini spacecraft around the planet or a dedicated space experiment. This challenge was however taken up by the ENCELADE team. 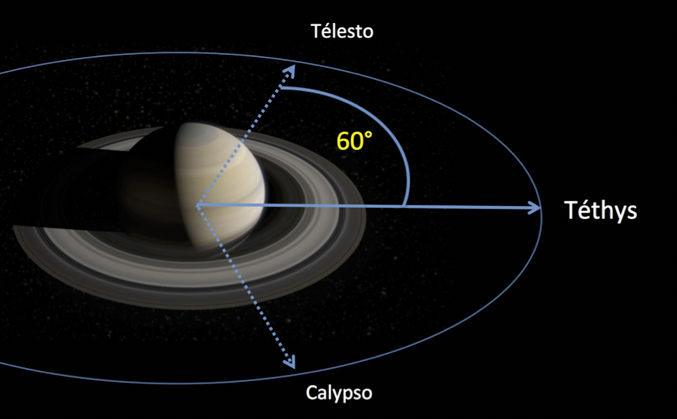 Legend: In the same orbit as Tethys, one of the main Saturnian satellites, but 60° ahead of and behind it, are two other smaller satellites, Telesto and Calypso. This particular configuration of the three bodies is the key which makes it possible for the researchers to measure tiny variations in Saturn’s gravitational field. Copyright: ENCELADE-ISSI

The method is clever: to be able to quantify these negligible fluctuations (a few parts in tens of billions), the researchers took advantage of a particular property possessed by two of Saturn’s moons, Tethys and Dione. Each of these moons shares its orbit with two other smaller moons, separated by an angle of +/-60°. From this “offset” position, the motions of the small moons are themselves affected by the deformation of Saturn associated with the tides raised by Tethys and Dione. While small, these changes are measurable because the fixed geometry of the system means that the effects accumulate, producing variations of a few tens of kilometres over ten years.

The new measurements of Saturn’s gravitational variations will provide us with information crucial to a better understanding of the internal structure of the planet. Coupled with future measurements planned for the Cassini spacecraft at the time of its descent into the atmosphere of Saturn at the end of its mission in September 2017, this work will finally make it possible to assess the nature of Saturn’s core: is it rocky or composed of lighter elements?

These new discoveries renew in-depth the vision of the formation and the evolution of the Saturn system. To give an account of this new approach in pictures, the team created a movie under the title “Saturn, an ecosysteme”, published online on 17 November 2016 on the Dailymotion channel of the Paris Observatory.

This animation benefitted from the support of the Observatory of Paris, the University Pierre and Marie Curie (UPMC), of the laboratory of UnivEarthS excellence (University Sorbonne Paris Quoted) and of the L’Oréal Foundation “For the Women and Science”.