Every person is a seismometer!

Every person is a seismometer!


If an earthquake is felt, one can report his experience to a national seismological institute (e.g. http://seismologie.be/en) or to international institutes such as the EMSC or USGS. Unfortunately, if an earthquake is felt across borders, felt earthquake reports will be submitted to different institutes leading to a fragmentation of the data. In a new study published in Solid Earth, an open access journal of the European Geoscience Union (EGU), a team of researchers demonstrate the applicability of a new method to share macroseismic data online in order to improve earthquake shaking maps.

Intensity maps of the 2015 Ramsgate (left) and 2011 Goch (right) earthquakes. Maps were made by merging all the felt reports submitted to several European seismological institutes. Credit: Van Noten et al. (2017).

Those researchers, among whom three are affiliated to the Royal Observatory of Belgium, applied this method on the online reports of two earthquakes felt in NW Europe (in Belgium, France, the Netherlands, the United Kingdom and Germany). First, they gathered all online testimonies that reported to have felt the 2011 Goch (Germany, magnitude 4.3) and 2015 Ramsgate (United Kingdom, magnitude 4.2) earthquakes. Afterwards, they stored the earthquake intensity deduced from these reports in regular grid cells. These new grid cell shaking intensity maps show a remarkable non-concentric shaking intensity patterns which are strongly linked to the bedrock depth in the felt area: 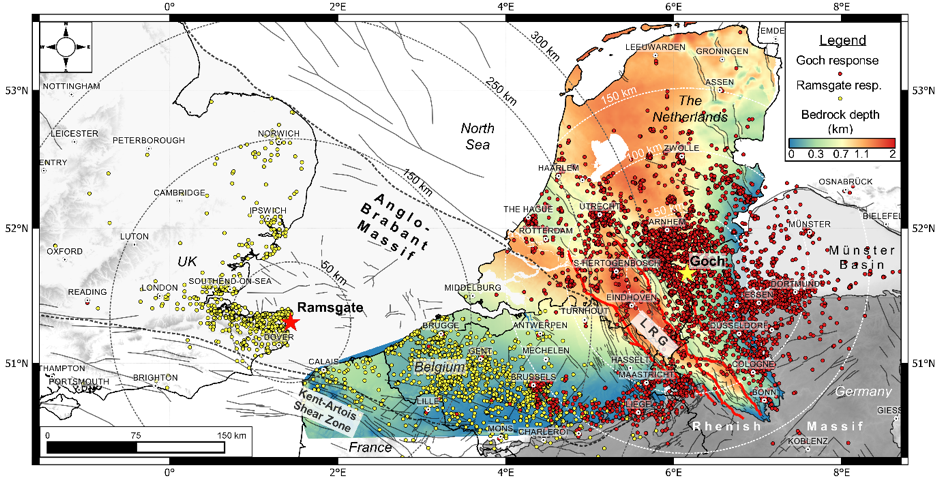 This study confirms that online earthquake reports are important for science and that storing intensity data in grid cells is a promising tool for seismological agencies to share intensity data anonymously.