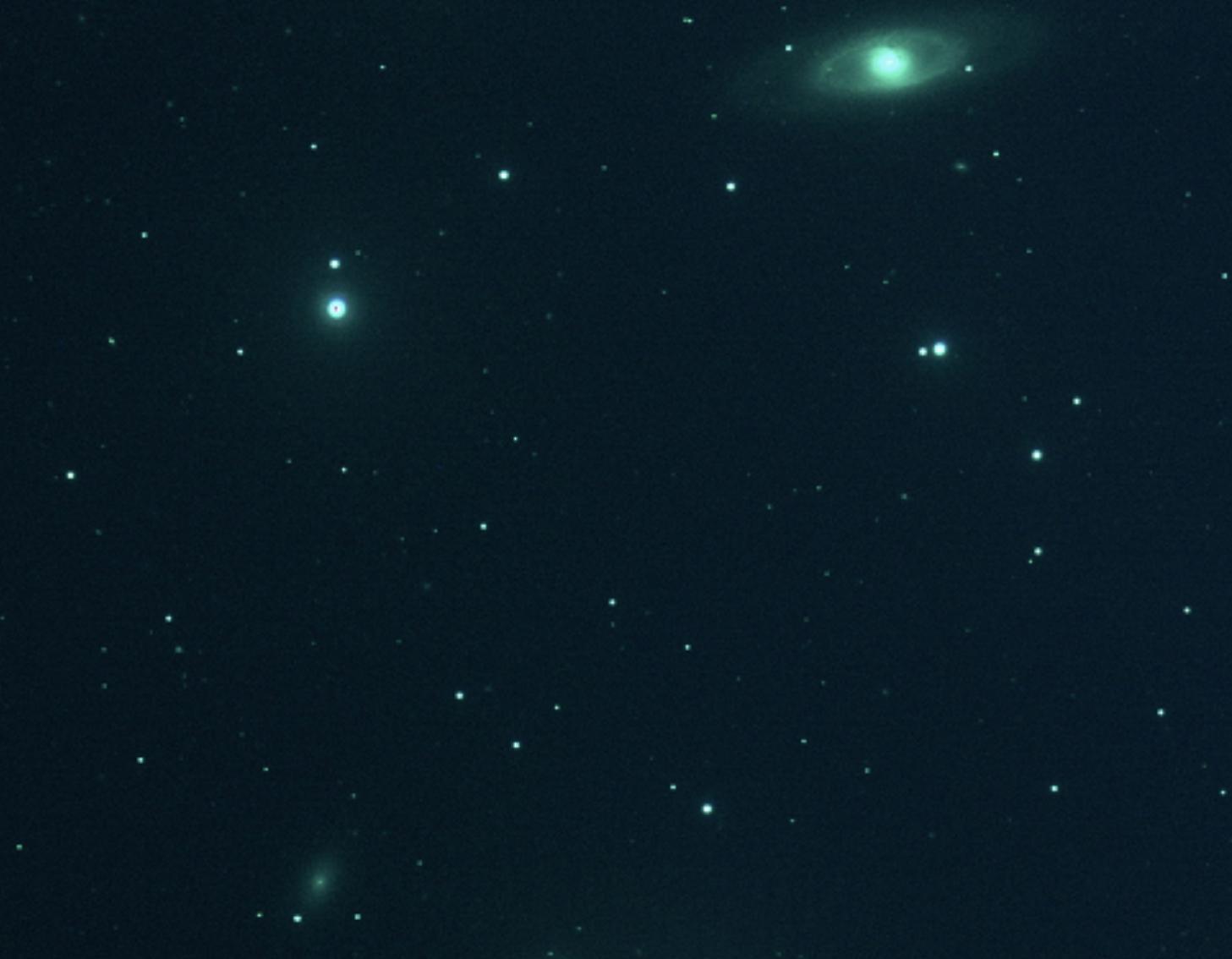 
In April 2022, the ILMT (International Liquid Mirror Telescope), located at the Devasthal Observatory in the north of India, has been used for the first time to observe the sky. This event, called the ‘first light’, marks the debut of this new telescope, designed and built by an international consortium with contributions from Belgium, Canada, India, Poland, and Uzbekistan. The team includes members of Royal Observatory of Belgium, in which Peter De Cat is the Belgian driving force behind the Belgo-Indian Network for Astronomy and astrophysics (BINA).

The Devasthal observatory and its telescopes 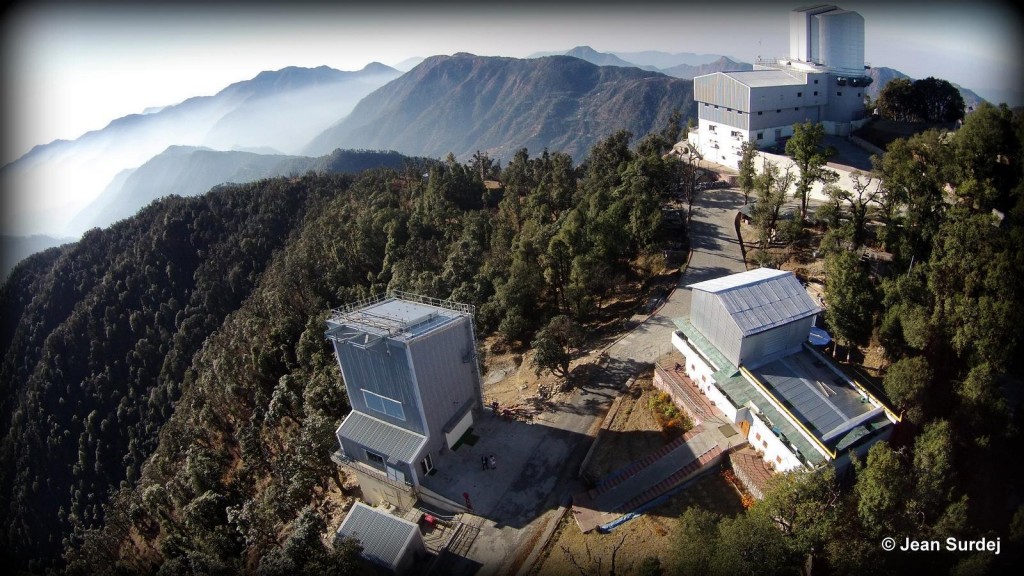 The Devasthal observatory is a new astronomical site in India, located at an altitude of 2450 metres in the Kumaun region of the Himalayas in the district of Nainital in the state of Uttarakhand (see Figure 1). It is an excellent site for astronomical observations with a median seeing of 1.1 arcsec and about 175 photometric nights per year. This observatory is operated by ARIES (the Aryabhatta Research Institute of Observational Sciences) in Nainital (India) and currently hosts three telescopes: a 1.3-m optical telescope, the 3.6-m DOT (Devasthal Optical Telescope) and the 4 m ILMT. The latter two are so-called ‘Indo-Belgian’ telescopes. They are both built by AMOS (Advanced Mechanical and Optical Systems) and CSL (Liège Space Centre; in French: Centre Spatial de Liège) in Belgium.

The DOT is a Ritchey-Chrétien telescope with a diameter of 3.6 metres that started its scientific operations in April 2017. The Belgian Science Policy Office (BELSPO) invested €2,000,000 in the construction of the DOT. In return for the financial aid, 7% of the observing time with the DOT is reserved for projects led by Belgian astronomers. Currently, four instruments are available: IMAGER (for imaging in the optical), TIRCAM2 (for imaging in the near-infrared), ADFOSC (for imaging and low-resolution spectroscopy), and TANSPEC (for imaging and medium-resolution spectroscopy). A high-resolution spectrograph is being constructed by the Australian Astronomical Optics (AAO) of the Macquarie University (Sydney, Australia) and is expected to be attached to the DOT at the end of 2024.

The ILMT is a zenithal telescope: a telescope that can only point towards the zenith (the highest point of the sky at the point of observation). Its main component is a circular container with a diameter of 4 metres that is filled with about 50 litres of liquid mercury, weighing almost 700 kg. It is spinning fast around a vertical axis at a constant speed for the liquid mercury to form a 4 mm thick parabolic reflective surface. The container is covered with a thin layer of mylar (a specific type of plastic) to protect the liquid mercury from the wind and to prevent the poisonous vapours of the liquid mercury from escaping. The reflected light passes through several lenses to produce sharp images. A large CCD (charge-coupled device), located in the focus of the mirror, is covering a field of view of 27 by 27 arcmin of the sky (60 arcmin equals 1 degree of angle). A CCD is a chip that converts the electromagnetic radiation that we receive from the stars into an electrical charge to create an image. The CCD of the ILMT consists of about 1.68 million pixels that are arranged in 4096 rows and 4096 columns. It records the images in time-delay integration mode: the CCD columns are aligned with the linear motion of stars while the read-out speed of the rows of the CCD is synchronised with the rotation rate of the Earth. The light of a celestial object is therefore accumulated as long as it remains within the field of view (for 102 seconds), making the telescope ideally suited to observe faint and diffuse objects. In this way, the ILMT can create an image of a 27-arcminute wide strip of the sky passing above Devasthal Observatory each night.

The ILMT project is a Belgian initiative led by members of the University of Liège (ULiège) in collaboration with partner institutes in Belgium, Canada, India, Poland, and Uzbekistan. The Royal Observatory of Belgium (ROB) was involved in the optical design of the corrector and made a financial contribution to the CCD camera. The ILMT has been used for the first time for celestial observations in April 2022 [1] [2] (Figure 2). After the closure of the observatory for the monsoon (from June to September) and a commissioning phase of a few months, the scientific observations of the ILMT are expected to start at the beginning of 2023. Hence, the ILMT is the second large optical telescope with a diameter of 3 to 4 metres that becomes operational at the Devasthal observatory with access to Belgian astronomers.

Liquid mirror telescopes are much cheaper compared to equivalent-sized regular telescopes where aluminised glass is used as a reflective surface. ‘The concept of this kind of telescope is not new, but the ILMT is the first liquid mirror telescope that will be fully dedicated to astronomical observations,’ says Prof. Jean Surdej (ULiège; University of Poznan, Poland), initiator and project director of the ILMT project. Previous liquid mirror telescopes were mainly used for tracking satellites or military purposes. The ILMT will collect data for (at least) five years, which allows for performing a deep photometric and astrometric variability survey of the objects in the ILMT strip. ‘This data set will be ideally suited to search and study variable and transient stellar sources, but we are in a favourable position because the DOT can be used to efficiently collect complementary data needed for in-depth studies of this kind of object,’ explains Peter De Cat (ROB). He is the Belgian leader of BINA: a network initiated in 2016 to foster collaborations between Belgian and Indian institutes with the aim to make optimal use of the DOT, ILMT, and other telescopes accessible through these collaborations. It is supported by BELSPO in Belgium and DST (International Division, Department of Science and Technology) in India. ‘Now that the ILMT is ready, BINA can finally proceed at full speed,’ he adds. 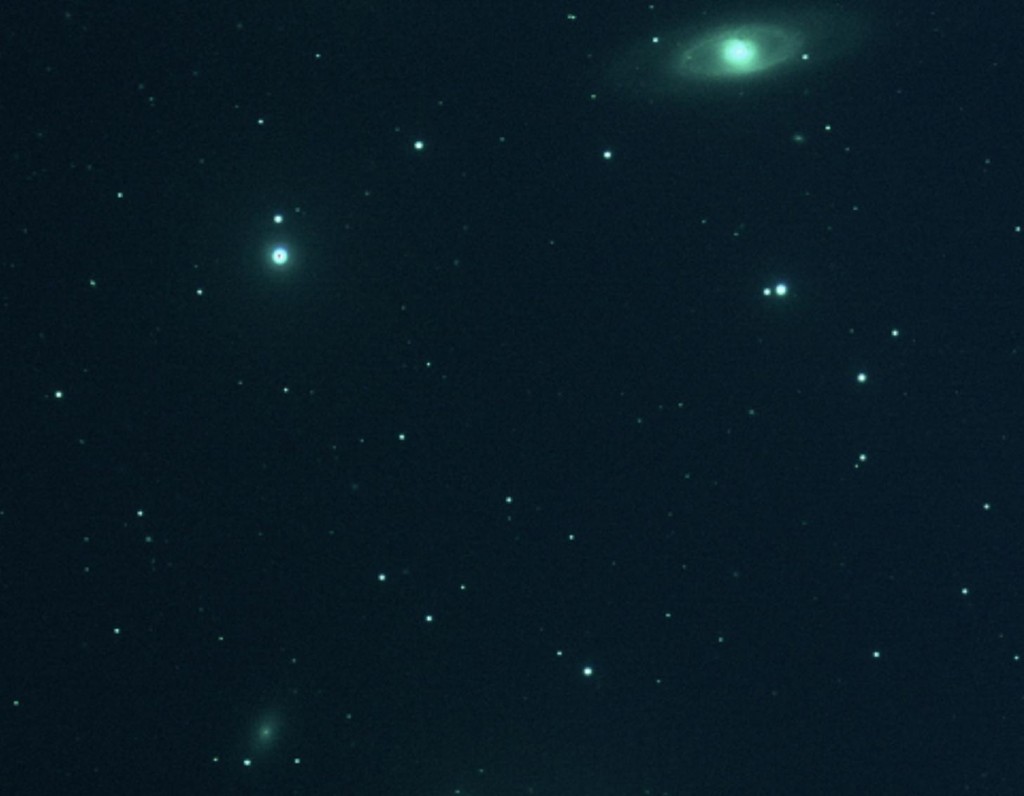 Figure 2: One of the first images from the ILMT, consisting of an overlay of three individual observations in three different colours of a small portion of the sky containing the galaxy NGC 4274 (upper right corner).

The Devasthal observatory has the potential to become a world-leading astronomical site, with many new observations and research opportunities for Belgian astronomers.