The Belgians Gilles Denis and Nathan Goffart collaborate with scientists from the Royal Observatory of Belgium (ROB), the Université libre de Bruxelles (ULB), the Université de Liège (ULiège) and the Geological Survey of Greenland and Denmark (GEUS) for climate research on the occasion of their future sport challenge in Greenland in April 2022.

Their challenge, called Nanok Expedition, consists in an untypical triathlon, combining successively a 600 km crossing of the inlandsis with skis and pulka along the Arctic Circle, a 1000 km sea kayaking journey down the east coast and a 1 km vertical rock climbing ascent for the opening of a new route. Nanok is the spirit of the polar bear in Inuit culture, hence the name.

Thanks to a GNSS receiver placed on the adventurer’s pulkas during their traverse of the inlandsis, Dr Nicolas Bergeot and his colleagues from Time-Ionosphere section of the ROB will be able to gather valuable satellite data. GNSS, an acronym for Global Navigation Satellite Systems, is a satellite system with which precise positions could be determined. Those data will notably be used to calibrate ice sheet elevation models in Greenland. 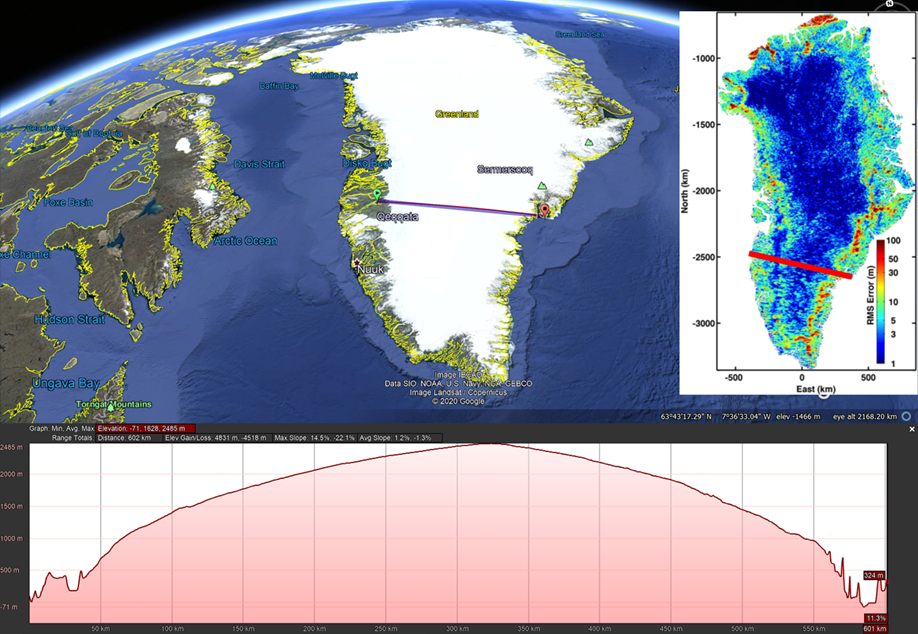 Gilles and Nathan crossed Greenland following the straight line on the map. The height profile of the crossing can be seen below.

For the ULB, Denis and Nathan will collect snow and cryoconite, a type of crushed stone consisting of dust, soot and microbes that lies on ice and snow. Those samples would help researchers understand the dust contribution to algae growth and extension on the Greenland Ice Sheet and its accelerated melting. Furthermore, ULB scientists will assess the impact of microplastics on remote seawater along the Greenlandic east coast.

For ULiège and the GEUS, they will perform snow pit measurements of winter snowfall accumulation. Those measurements will help to validate the researcher’s current modelled surface mass balance on the Greenland Ice Sheet.

On March 12, 2021, the two friends will head back to the North to prepare for this expedition and to test the experimental setups.