World record in the underground laboratory of Membach: A sphere of mass 4 grams has been levitating for 8081 days

World record in the underground laboratory of Membach: A sphere of mass 4 grams has been levitating for 8081 days


On Monday 18th of September 2017, the superconducting gravimeter of the Seismology-Gravimetry service installed at the Royal Observatory of Belgium’s facility in Membach (close to Eupen, eastern Belgium), broke two records: firstly, the gravimeter has been measuring gravitational variations for the longest recorded period at a single location, and secondly, recorded the longest period that an artifact has been levitating using superconduction. The total duration is 22 years and 45 days, or 8081 days.

The principle measurement is based on the monitoring of the levitation of a superconducting niobium sphere of mass 4 grams. In 1995, currents were injected into superconducting coils causing the sphere to levitate; the currents have never been dissipated ever since. Although the fundamental importance of this measurement is not yet clear, as it does not contradict the physics of persistent currents, it is at least worthy of a place in the “cabinet of curiosities” of solid state physics.

An article discussing this double record will soon be published in EOS Transactions, the journal of the American Geophysical Union.

Measurements such as these are important in geophysics, as they’re rare over such long periods, and because they provide a record of the long-term variation in gravity due to slow tectonic movements and/or climatic variations. Such measurements are also important for the study of the water cycle that influences gravity.

The aforementioned gravimeter is still going strong and is not ready for retirement yet! Long-term monitoring of gravity has been shown to be of the highest scientific interest, and is measured in several laboratories. This gallant instrument is still participating in numerous projects, such as understanding long period gravity variations. 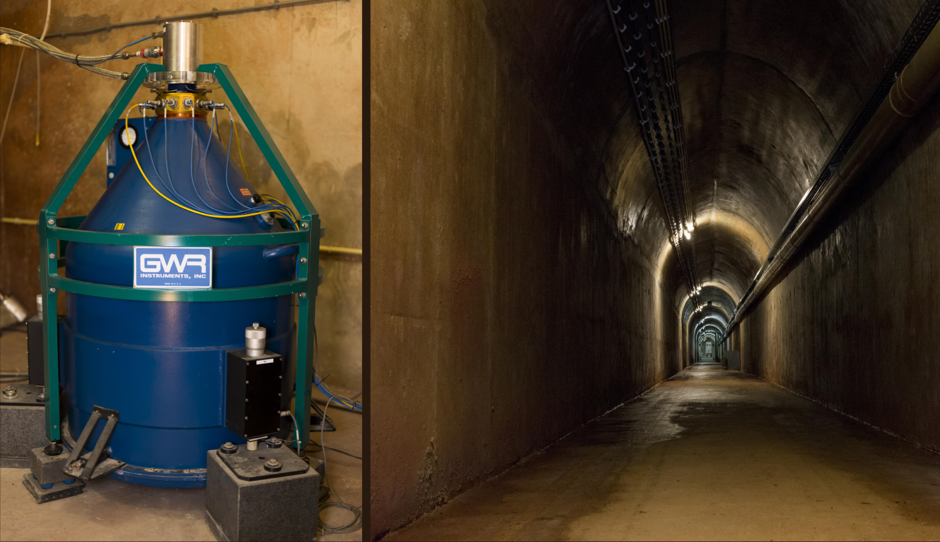 The superconducting gravimeter is located at the end of a 130 m – long gallery, 48 meters underneath the surface, in Membach (city of Baelen, eastern Belgium). The instrument sensor is immersed in liquid helium in which the temperature is held at -269°C, in other words 4 degrees above absolute zero. Photo credit: E. Coveliers & ORB-KSB. Copy authorized with mention of the source.

The Seismology-Gravimetry service of the Royal Observatory of Belgium thanks the Direction de l’Exploitation des Barrages – DGO2 and the Département de la Nature et des Forêts of the Walloon Region, the municipality of Membach-Baelen, Air Products and the National Lottery for their support.