In 2020, 52 earthquakes and 11 induced earthquakes were located by the Royal Observatory of Belgium in or near Belgium. There were no felt earthquakes on Belgian territory.

In 2020, 52 natural earthquakes occurred in a zone between 1° and 8°E longitude and 48° and 52°N latitude (Figure 1). During the same period, the Royal Observatory of Belgium (ROB) also measured 11 induced events, 389 quarry blasts, 6 controlled explosions and one sonic boom. The catalogue is complete for natural earthquakes and contains a selection of quarry blasts and earthquakes induced by human activities, e.g. linked to (rock) mass removal in mines or geothermal exploitation. In 2020, there were at least 6 measurable explosions at sea. Most explosions are performed by the Belgian, Dutch or French Army to destroy WW1 and WW2 bombs.

The largest earthquake recorded on Belgian territory in 2020 occurred on 5 May 2020 in Modave. That earthquake had a local magnitude of 1.7. There are nine felt earthquakes in the 2020 ROB catalogue but none of these earthquakes were felt in Belgium. Only one quarry blast (6 May 2020) at the Soignies quarry (ML=1.7) was felt by the local population who spontaneously answered the “Did You Feel It?” macroseismic questionnaire on the ROB website.

In comparison, last year in 2019, 45 earthquakes occurred in and around Belgium. The largest earthquake was the induced earthquake in Dessel on 5 December 2019 (magnitude ML=2.1) and which was locally felt.

The monitoring network of the Royal Observatory of Belgium has remained fully operational during the COVID-19 crisis. This results from expertise of technical and scientific staff and from continuous developments allowing the level of excellence to be maintained. 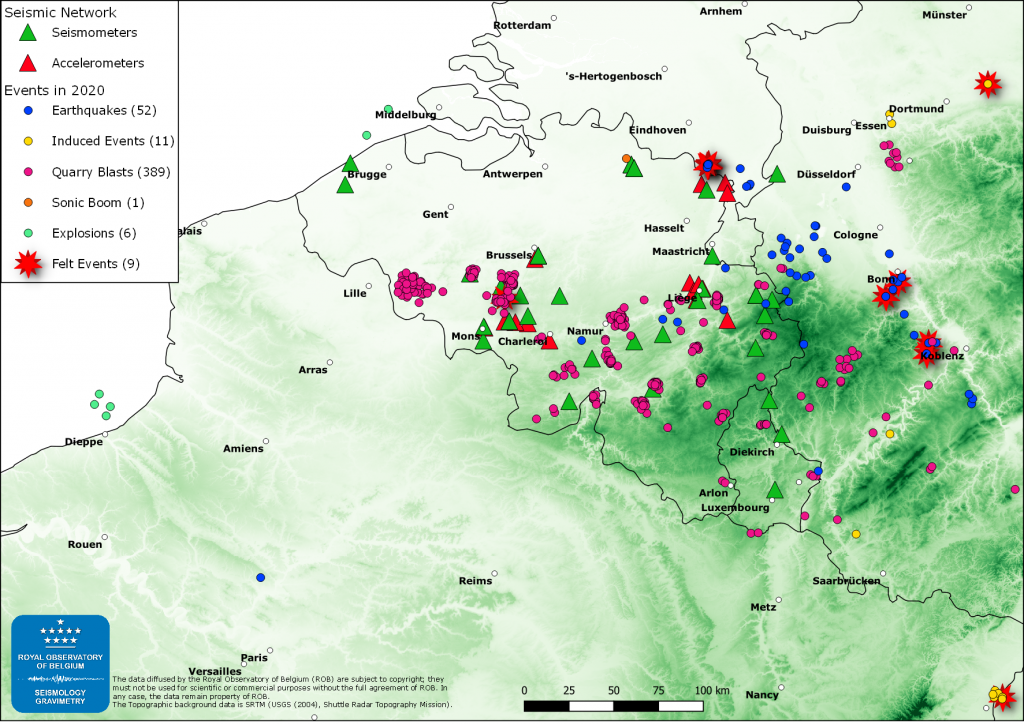 Events recorded in 2020 by the Seismic Network of the Royal Observatory of Belgium.