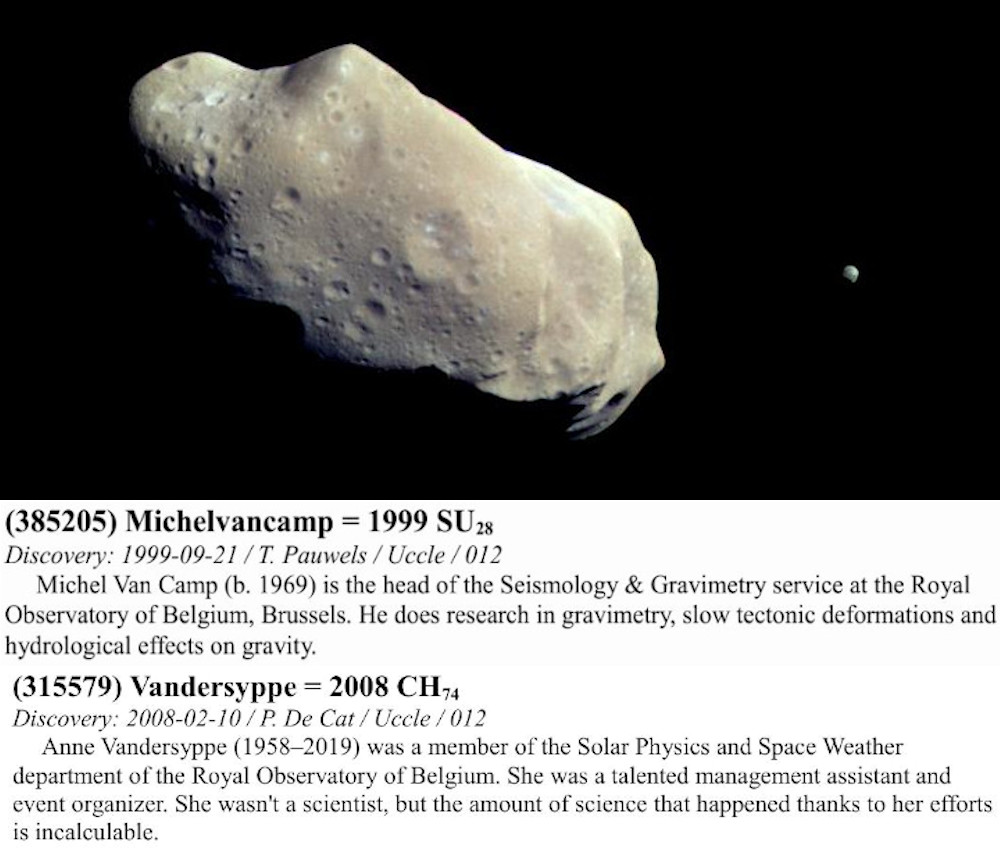 
Recently, two colleagues from the Royal Observatory of Belgium have had their names given to two asteroids. They are Michel Van Camp, head of the Seismology and Gravimetry service and researcher in gravimetry, and our sadly departed colleague Anne Vandersyppe, former secretary of the Solar Physics and Space Weather service, who passed away more than two years ago.

These two asteroids, now named (385205) Michelvancamp and (315579) Vandersyppe, were discovered in Uccle by Thierry Pauwels and Peter De Cat, respectively, both astronomers at the Observatory. Every year, Peter De Cat actively participates in the flower sale as part of the campaign of ‘Kom Op Tegen Kanker’. To the colleague of the Observatory who made the largest contribution to the action, he gives the opportunity to propose a name for an asteroid discovered by scientists of the Observatory. These name proposals are then submitted by Peter De Cat to the WGSBN (abbreviation for Working Group Small Body Nomenclature) of the International Astronomical Union for approval.

Figure 2: Citation for asteroid (315579) Vandersyppe published in the WSGBN newsletter of 20 December 2021.

The recent naming of these two asteroids is an opportunity to honour the direct and indirect contribution of our two colleagues to science. It highlights Michel Van Camp’s expertise in gravimetry, the science of measuring gravity and its variations. One of his lines of research consists in studying the variations in gravity caused by changes of groundwater masses. For example, he has shown that tree evapotranspiration modifies gravity on hot summer days.

Detail of a compilation of five successive CCD images taken on the night of 20/21 September 1999 in Uccle by Thierry Pauwels. Several asteroids can be distinguished, including the asteroid (385205) Michelvancamp, here annotated as ’TP0214’. In a single image, asteroids are indistinct from stars, but their faster motions in the sky make it possible to differentiate them from the latter. Therefore, to detect asteroids in a given field of view, several images are taken at close time intervals and then superimposed with a different colour code. The asteroids then appear as a beaded line in rainbow colours, while the stars appear as grey dots and the image noise as single-coloured dots. The full CCD image compilation (see Figure 6) shows 16 asteroids, which is the largest number ever detected in a single field of view of the CCD camera on the Uccle Schmidt telescope. With this record number, this night was considered part of one of the most fruitful observing campaigns, if not the most fruitful with the Observatory’s Schmidt telescope since its upgrade in the mid-1990s.

The naming also highlights the substantial, but often poorly acknowledged, contribution of non-scientists to the field of research, such as the one of our late colleague Anne Vandersyppe. The corresponding citation, written by Anne’s close collaborators, contains the following mention: ‘She was not a scientist, but the amount of science produced through her efforts is incalculable.’ Naming an asteroid after her is thus a very nice way to honour her memory and her undeniable contribution to the work of the Observatory’s scientists. 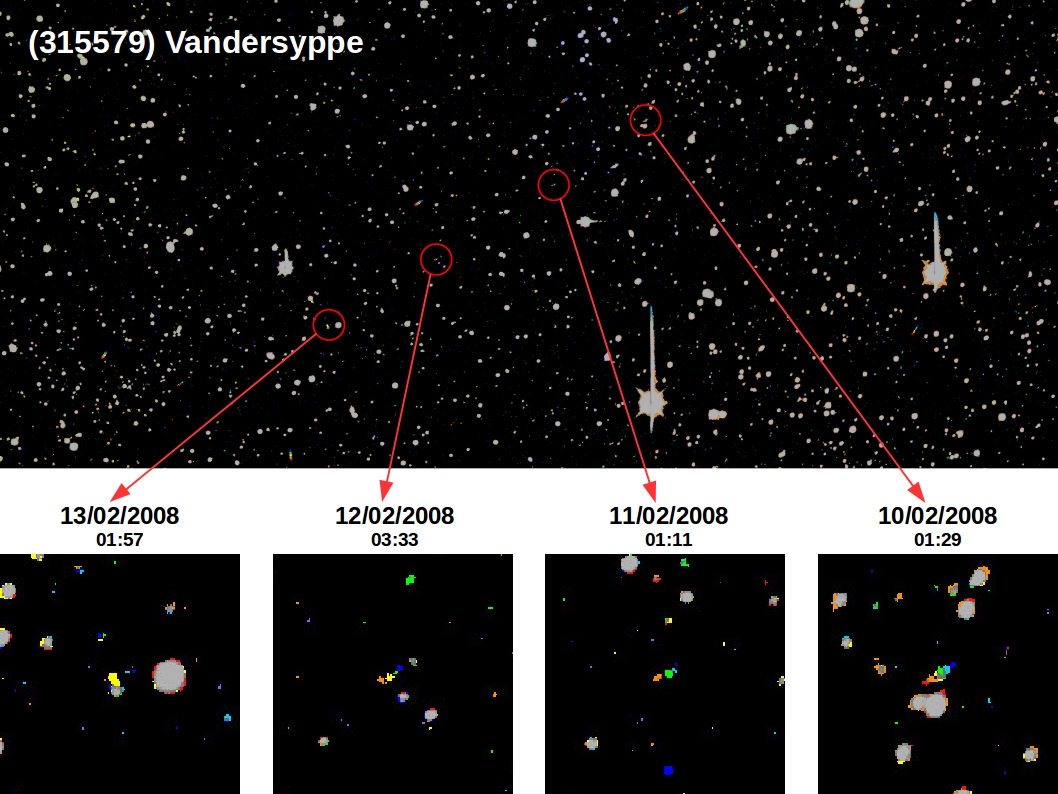 Compilation of the first four nights during which asteroid (315579) Vandersyppe was observed in Uccle. The asteroid is moving from right to left in the top panel. Each of the four images below is a compilation of five or six different colour-coded CCD images taken at close time intervals centred around the time indicated on the image. These observations were made from 10 to 13 February 2008 by Peter De Cat and Thierry Pauwels with the Observatory’s Schmidt telescope. 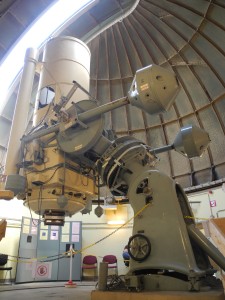 Figure 5: The Schmidt telescope of the Royal Observatory of Belgium in Uccle, during the Observatory’s Open Doors of 29 and 30 September 2018.

The asteroids (385205) Michelvancamp and (315579) Vandersyppe were discovered with the Observatory’s Schmidt telescope. This large telescope, with a mirror of 1.2 m diameter, was upgraded in the mid-1990s by the installation of a CCD camera. Thanks to this camera, more than two hundred asteroids were discovered. More details on the history of observations with the Schmidt telescope can be found in the issue 66 of Science Connection (in French: https://www.belspo.be/belspo/organisation/publ/pub_ostc/sciencecon/66sci_fr.pdf or Dutch https://www.belspo.be/belspo/organisation/publ/pub_ostc/sciencecon/66sci_nl.pdf). 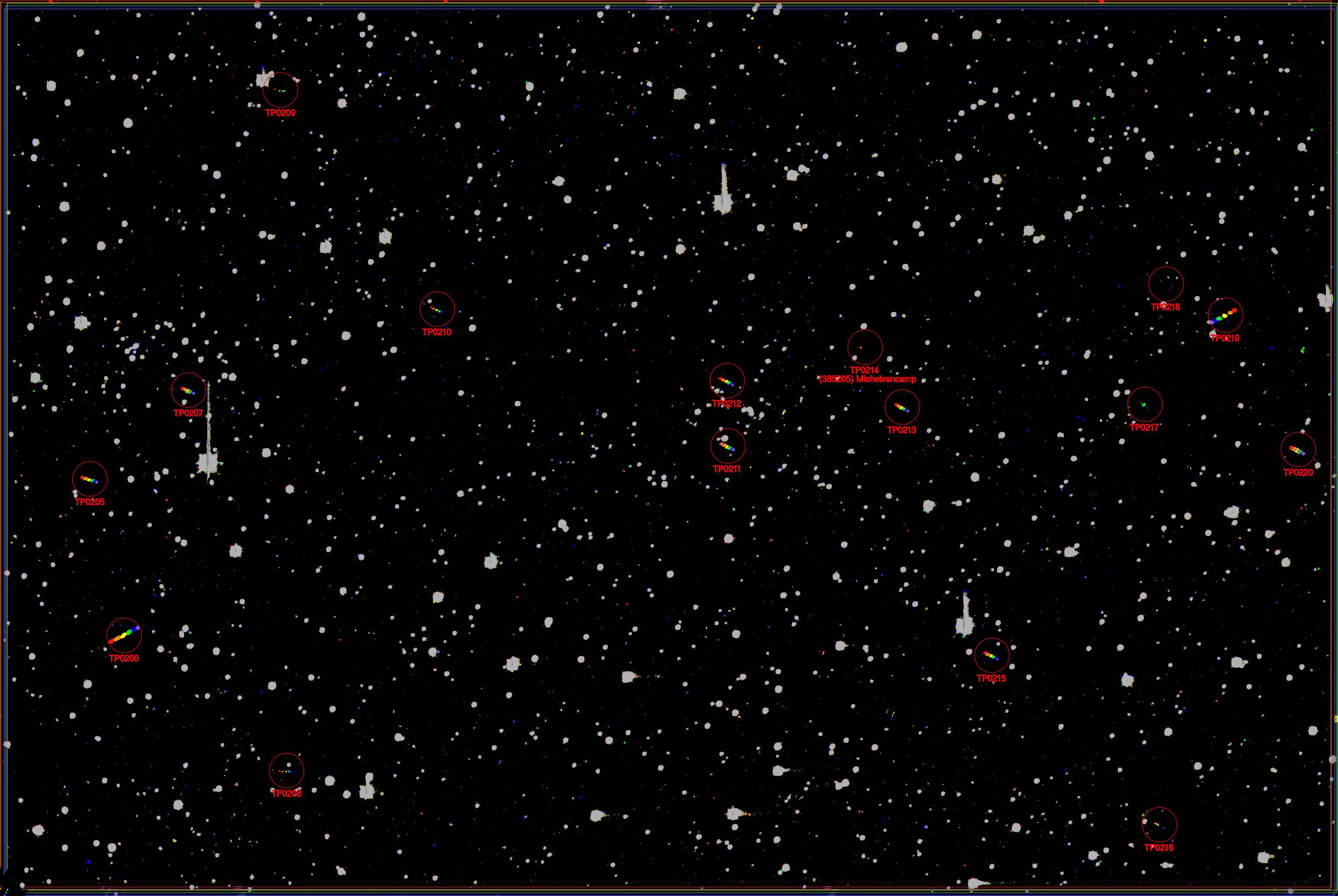 Compilation of six consecutive CCD images taken in Uccle by Thierry Pauwels during the night of 20 to 21 September 1999. The image shows 16 asteroids, which is the largest number ever observed in a single field of view of the CCD camera on the Uccle Schmidt telescope. Of those 16 asteroids, 6 to 8 were discovered at Uccle. The asteroid (385205) Michelvancamp is annotated here as ’TP0214’. Asteroids appear as a beaded string in rainbow colours, while stars appear as grey dots and image noise as single-coloured dots.